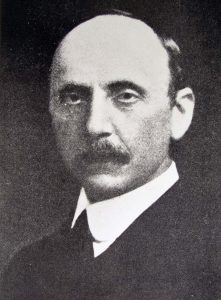 Sir Frederic Hewitt, born in London 1857, has the distinction of being the first anaesthetist to be knighted. In 1901 he was appointed as the official anaesthetist to England’s King Edward VII and the following year, just two days before the planned coronation, Hewitt was called upon for surgery to remove a royal appendix abscess. It was this act which saw him made a Member of the Royal Victorian Order and in 1911 receive his knighthood.

Hewitt’s first foray into researching the administration of nitrous oxide came in 1885 with the Lancet publishing an article on a new method of administering and economising nitrous oxide. In 1892, following years of trials, Hewitt exhibited a device he created as a modified version of the Clover Inhaler.

Five years later Hewitt published ‘The Administration of Nitrous Oxide and Oxygen for Dental Operations’ with a second edition printed in 1901 and now available in the Richard Bailey Library. HALMA member and SPASM (the Society for the Preservation of Artefacts of Surgery and Medicine) Curator, Dr Gary Klopfer describes this as a fascinating monograph by the then leading authority that gives an insight into the level of knowledge and practice of nitrous oxide anaesthesia at the time, half a century after its discovery. Gary writes: 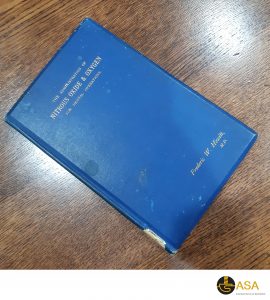 This book is a complete ‘how-to’ for dental anaesthesia at the time, with a brief history, recent advances in science and techniques, details of his apparatus (including where to buy), very comprehensive instructions on preparation, administration and application for patients of different sexes, ages, physical characteristics and comorbidities, drawing on the author’s vast experience.

The first surprise is that, at the turn of the century, the addition of oxygen still needed to be advocated. It is noteworthy that in the four years between the two editions of his monograph, the addition of oxygen became much more widespread. There is no mention in the book of oxygen being needed to sustain life, rather it is advocated as a means of making the anaesthesia smoother by reducing the symptoms of “asphyxia” (cyanosis, “stertor, jactitation (‘anoxaemic convulsion’) or lividity”), but at the cost of less deep anaesthesia with “excitement and screaming.

My favourite paragraph is: “Owing to the fact that by the use of oxygen with nitrous oxide, a far more tranquil and sleep-like anaesthesia is produced than with nitrous oxide alone, there is less objection to friends being present than under other circumstances.” Another: “I am still unable to decide whether the almost invariable absence of suffocative sensations is referable to the presence of the small proportion of oxygen, or whether it is due to the very free channels of the apparatus.

Today’s reader will assume that the advice in the book refers to both induction and maintenance of anaesthesia during the dental procedure. As one reads the manual, with a recommendation for the use of either a “face piece” or a “mouth tube”, one wonders how the writer deals with competition for the airway from the dentist. It is not until well into the book that we realise that the nitrous oxide (with or without oxygen) was used to render the patient unconscious, and then the gas was removed, and the dentist had 40-70 seconds to perform the dental procedure before the patient woke up! The time taken to become unconscious and to remain unconscious before waking were attributed to the concentrations of oxygen added to the nitrous oxide. Incidentally, a mouth tube is not recommended (“The idea of holding between one’s lips a tube that has just been used by another patient is not a pleasant one…”)