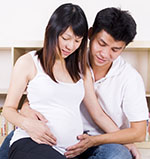 Lily is a 26-year-old who moved from Asia five years ago to complete her education. She and her husband, Danny, are both university students. Having arrived in the country by different routes at about the same time, they met in one of their classes and married about two years ago.

Lily is now expecting her first baby. When she was six months pregnant, her doctor ordered a routine  ultrasound examination of the baby. This showed no problems with the baby, but the  placenta was positioned lower than normal in the womb or uterus. The  obstetrician asked Lily to undergo a repeat examination, at seven and then at eight months. He wanted to see if the placenta had moved upwards as the baby had grown and the womb had enlarged, as can sometimes occur. If the placenta remains low, then it can block the passage of the baby through the birth canal and cause severe bleeding. For these reasons, a  caesarean section may be required. However, Lily had read in a magazine that the ultrasound examination might hurt the baby and so she did not go for the repeat examinations.

Lily’s obstetrician has informed her of the pros and cons of attempting to deliver naturally (vaginal delivery) versus an  elective Caesarean section. However, without the results of the ultrasound examination, the obstetrician is unable to say how safe an attempt at a natural birth might be. Danny is not sure how to react. Lily has spoken with her mother by telephone.

“My mother said I should just trust in nature. She had seven children without any problems. I really want to have my baby the normal way.”

Finally, on the last prenatal visit before her due date, Lily’s obstetrician tells her that, without the results of a recent ultrasound scan, he cannot guarantee her safety or that of the baby if she goes ahead with an attempt at a vaginal delivery. After much soul-searching and discussion, Lily and Danny agree that she should have the scan, in the hope of not having a Caesarean. The results of the examination indicate that the placenta has moved upward as the baby has grown and the uterus has expanded. The obstetrician tells Lily and Danny that a normal vaginal delivery is likely to be successful but there is a small possibility of needing a Caesarean section.

“We would need to consider this if you had additional bleeding during labour or the baby showed signs of distress” he said.

“You can go home, but we’d like you to come back right away, as soon as you go into labour. Forget what your mother said about staying home and washing the floors to strengthen the contractions.”

Turning to Danny, the obstetrician adds, “I’m counting on you to bring her in right away – we’d like to keep a close eye on her during all of her labour.”

Danny looks at Lily and then back at the obstetrician. “Yes, I will do that….”

“But before then, there is one other thing. I’d like an anaesthetist to see you – to talk about the anaesthetic – just in case you need a Caesarean.”

The next day, Lily goes to the hospital labour ward where she checks in, saying that she is there to see the anaesthetist. After about twenty minutes, Dr. Jenkins arrives. She introduces herself, apologises for being late – “Twins”, she says – and explains that she will talk with Lily and Danny about anaesthesia for a Caesarean section.

Lily is a little unnerved by all of this and recalls her mother’s words of caution.

“Would I really need an anaesthetic to have my baby?” she asks.

“Well, you don’t have to have an anaesthetic if the baby arrives normally, although many women prefer the pain relief provided by an  epidural. In your situation, however, I understand from your obstetrician that there is still a possibility that you might need a Caesarean section, which means that you’ll need to have an anaesthetic of some sort. So my job is to explain something about an epidural, because you can have one for both a normal birth and if you needed a Caesarean section.”

Dr. Jenkins proceeds to explain about epidurals, how the needle is inserted into the back, followed by threading in a fine plastic tube and pumping long-acting local anaesthetic into the area around the nerves as they branch off the  spinal cord.

“Wouldn’t I need to be asleep for the Caesarean section?”

“Not necessarily. In the past we used to use general anaesthesia, where you are totally asleep, for all Caesarean sections. Sometimes we still need to give a general anaesthetic but most of the time we use an epidural or a spinal. You don’t feel any pain, and you can see and hold your baby as soon as it’s born.”

“Would I have to watch the operation – the surgeon cutting me open?”

“Heavens, no! We put up a screen so you don’t see anything until your baby is out and cries.”

“So why would I need an epidural for a natural birth, if I’m not having an operation?”

“Once again, it’s for your comfort. We want to make sure you go through the whole thing without any pain. The anaesthetic will make you numb from the waist down.”

“But then I won’t know when my baby is born?” cries Lily.

“You won’t be completely numb,” answers Dr. Jenkins. “We can carefully control the amount of anaesthetic given so that you can get the sensation of needing to push, and you may even be able to walk around the ward when you’re in labour.” After a pause Dr. Jenkins continues, “I take it that you didn’t go to any prenatal classes.”

“No,” answers Lily, “I was too busy studying for my course.”

“What we try to achieve with an epidural is the best of everything – no change in the birth process, no effect on the baby, while being able to retain sensation of the birth without the intense pain. We can also do the same thing with a newer technique called a combined spinal/epidural (CSE). In addition to having an epidural, we inject a small amount of anaesthetic into the fluid that surrounds your spinal cord. This technique gives much better preservation of muscle power – you can walk and even squat, but without any pain.”

“Why yes, of course you do, and you need to be entirely comfortable with any plans for your care. Right now I have to go and check on another patient in labour. I’ve brought you our pamphlet which explains your options. Why don’t you two have a look at this and work out what you prefer.”

“I’ll be back to answer any questions you might have – probably in about twenty minutes – that’s if you can wait.”

When Dr. Jenkins returns, Danny asks if he can be present during the baby’s birth. Dr. Jenkins replies stating that he would be able to stay for the entire process, unless there was a need for a general anaesthetic. If so, then he would be asked to leave.

Lily and Danny leave without having yet made any final decisions about Lily’s pain relief options.

Five days before her due date, Lily’s waters break, fortunately without any sign of blood. As promised, Danny brings Lily directly to the labour ward. Lily and Danny have re-read the pamphlet that Dr. Jenkins gave them and they have talked several times about what Lily would like to do. Danny has said that he will help Lily in whatever way he can, and that if she wants to have anything for pain relief during labour, then that is her choice. Lily decides that she will have an epidural.

When they arrive in the labour ward, Dr. Jenkins is again on duty. Lily and Danny speak with her and Lily says that she wants to have an epidural. By now, Lily’s contractions have started and are quite regular, every three minutes. Dr. Jenkins suggests that the epidural can be inserted now, before the contractions grow stronger and Lily finds it harder to lie still during the procedure. Lily agrees.

Dr. Jenkins first inserts a very large  intravenous  cannula into a vein in Lily’s right forearm – because Lily is left-handed – and away from her wrist so that Lily is free to use the hand. Then, with Lily sitting with her back near the edge of the bed, Dr. Jenkins inserts an epidural catheter.

By this time the contractions are getting stronger. And although she tries the nitrous oxide, breathing from the mask, Lily begins to wonder how the pain could ever get worse.

Dr. Jenkins decides that, because an  emergency Caesarean is still a possibility, a plain epidural would be the best option. After the first dose of anaesthetic is injected through the tubing, Dr. Jenkins tapes the epidural catheter up Lily’s back. Lily is then allowed to lie down, but with a pillow under her left hip. This is to ensure that the weight of the baby in the uterus does not obstruct the flow of blood in the  vena cava, the large vein in Lily’s abdomen. If this were to happen, then Lily might feel faint or the baby might show signs of lack of oxygen.

“Nothing’s happened yet!” says Lily, a little distressed, but shortly after, her legs become warm and the pains gradually disappear. However, she is still able to sense when she has a contraction. “Thank you, Dr. Jenkins,” smiles Lily, “I’m going to enjoy this.”

Some hours later, Lily is sitting in an armchair cradling the new baby. Danny, the proud father, stands alongside.

“I’ve been on the phone to my mother, and she is very happy that I didn’t need an operation,” Lily says. “It was much better than I thought – I didn’t really feel any pain at all, yet I knew what was happening all the time, and I was able to hold Grace as soon as she was born!”